Seven steps to a fair and reasonable peace that might even satisfy the Gareth Evans/Bob Carr/Bob Hawke school of solving the problem of Israel.

For the benefit of readers outside Australia, my country has decided to abstain on the vote that admits "Palestine" to the same status as the Vatican at the UN. It probably already has by now.

There's something strange and unnatural about that,  don't you think? Something vaguely threatening in the air for the future of civilisation. A bad omen. Like when Gandalf gets word that the bad guy wizard in the next tower is experimenting with mixing the seed of men and orcs to get a better class of warrior.

I am not of course talking about how Australia voted in the UN. I'll get back to my gutless country in another post. In particular to those three gentlemen. For now it is perhaps enough to quote my old dad word for word when he heard our Prime Minister had been rolled when she tried to stand by the US and Canada and stand up for Israel on such an important principle.

I feel diminished as an Australian

"Palestine" in the same pew as the Pope?

If it were the Protestants you could perhaps more easily understand.

The most consistent thing you hear from the Israel critics in the West after they run out of everything else is Israel is the strongest party. Solve it. Otherwise it doesn't want peace. Go away.

Often they mean that literally.

OK. Why not do what they advise? Israel has the "power". Use it.

Israel annex Judea and Samaria and declare the borders where they are and at the river with Jerusalem the eternal capital of the Jewish homeland.

The entire population of the Land of Israel are declared citizens with equal civil and political rights guaranteed irrespective of race, religion and sex. All rights of Israel's secular liberal democracy are available to all of her citizens.

The right to hold, buy and sell property without coercion and to whoever irrespective of race or religion prevails over all commerce.

Israel is relieved of all responsibility for the population of Gaza.  The role of feeding them and providing all other services goes to the Australian Council of Churches, the British Methodist Conference, the Republic of Ireland, Norway, Sweden, Elvis Costello and Malcolm Fraser.

All countries committed to the international rule of law recognise the new borders and move their embassies to Jerusalem with all due ceremony and celebration. Each guarantees the peace of Israel by bilateral treaty and commits to solving the problem of the "refugees" once and for all

All these countries cease funding UNRWA forthwith. It is an obstacle to peace. It gets in the way. So do all people wearing blue helmets. Besides these countries are going to need the money. (See Step Four).

Israel acts immediately to enforce the law across the land

Israel works towards a constitution with a bill of rights that protects all citizens. Education is compulsory and is the exclusive  responsibility of the state as are all branches of civil law such as marriage law. Any form of forced marriage and marriage of minors is outlawed.  Religion is free and the right of citizens to move between or abstain from religion is enshrined. Religious practices and education that encourages violence or racist or religious incitement are outlawed just as political violent incitement.

What is wrong with this plan?

Demographics? I don't buy that.

There could be as many as one million fewer "Palestinians" in Judea and Samaria than official UN figures.

For sure the "Palestinian Territories" have among the lowest death rates in the world.  Much lower  than Israel or Australia but there are two things that drive that apart from living under relative peace and prosperity with free quality medical services on tap, especially  in Judea and Samaria.

The first is the high birth rate, again among the highest in the world.  Over five births per woman which is as about as high as anywhere in the impoverished Third World.. This is because females are forced into marriages at fifteen instead of going to school hence ensuring a life of drudgery and dependence.

The other is the strong material incentive for people not to die. An UNRWA card carries with it benefits for the individual and the number on issue is important to the  group. Why would a mere death get in the way of that?

Before the Islamic Revolution the women of Iran were among the most liberated in the Muslim world at least in the cities. They began to go to universities and have careers just as in the West. As a  result the birth rate fell.  That comes with prosperity, freedom and women's liberation. This is why the Iranian regime has moved to restrict female access to higher education. With a measure of freedom comes fewer babies.

In a generation Muslim  young people of Judea and Samaria will look less like this: 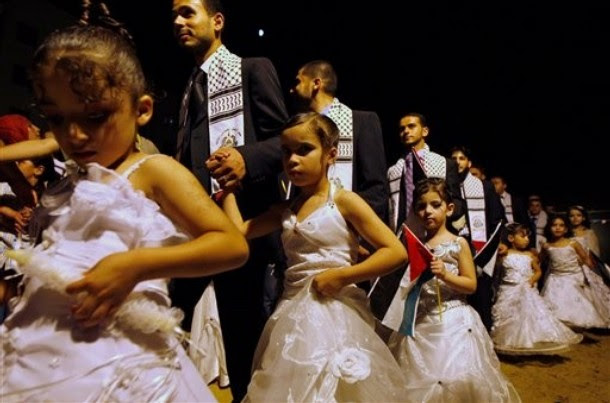 Then would Gareth Evans decide that he and his colleagues (and Israel, United States and Canada) are back on the right side of history?

Any better ideas Gareth? How about you Bob? Either of you?