For almost a week Israel has been under attack.

If you live in Australia and unless you have seen a blog like  this  it is very likely you would not know that. If you have received all of your news from Australia's national broadcaster you have no chance at all of knowing that.

It's not that the ABC didn't know that Israel was under attack. They have correspondents living in the country for chrissake. It's just that they did not consider it news.

And it's not that their "experts" didn't know that an Israeli response was imminent. You don't need to be an expert to know that. All you have to do is pick any decent country in the world, say Canada, or Australia, and ask yourself what would they do and you have your answer.

It's just that the ABC editors chose to keep that "expert analysis" from you.

This is what Mike Lumish had to say at friend blog Israel Thrives  five days ago (and Shirl's comment).

And, yet, somehow it is not on the current New York Times front page.


The truth, of course, is that the left tends to think that Israel has it coming, anyway.


And this from Doodad last Sunday: 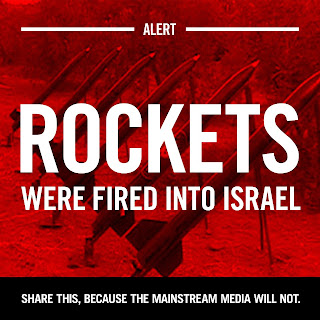 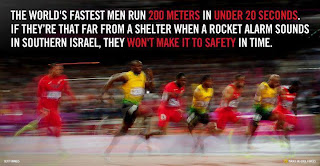 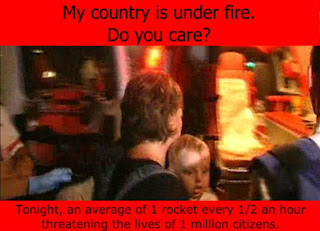 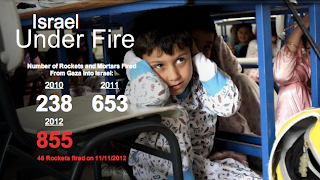 For a week now the blogs have been shouting the news.  Israel is under attack.

Last night the Israelis responded. This morning the ABC  reported.

Leading with this picture of an apparently  injured civilian. Not an Israeli civilian naturally.  A "Palestinian" civilian of course. You can tell immediately she is "Palestinian". Israeli ambulances have paramedics and gurneys.   "Palestinian" ambulances never do. They only ever seem to have cameras and cameramen. I count perhaps five in this picture and that doesn't include the photographer.

Jabari's death came after Israel and Hamas agreed to an informal truce following days of strike and counter-strikes which saw Israel kill seven Palestinians while militants fired more than 120 rockets over the border, injuring eight.

That's it. Did you blink?  That is the only mention by the ABC of the rocket attacks on Israel  in a week.


Followed by  this interview with Vice-president of the Australia-Palestine Advocacy Network, Reverend Gregor Henderson which has just been broadcast on ABC 24 hour news..


Listen to this pompous supercilious cleric for as long as you can and then try denying  that Protestant clerics have once again become the most virulent carriers of "antizionist" bigotry outside the left in the West. Nor is it confined to leftist clerics. It seems to be in their blood.

"Israel is not interested in peace"  " More lives will be lost unless Israel turns to peace". "Israel should obey international law."  "It is the blockade and the occupation that is causing Palestinian violence " "Israel is of course the stronger party ..."

A question for Gregor Henderson

Why don't you use your good offices with the "Palestinians" to persuade them with all your might to accept Israel, accept "Palestine" and to raise their children in love peace and prosperity?

Why don't you even try?


And then an interview with :Professor Amin Saikal  Director of the Centre for Arab and Islamic Studies and Professor of Political Science at the Australian National University....

... whose "expert analysis" on why there has been this sudden military offensive by Israel completely out of the blue  begins with "I think there has been some rockets fired at Israel but ..." and goes down hill from there.


This is not a joke. This is not some weak comic attempt at parody. This is a senior Australian academic authority on the subject and if you are Australian this is "your ABC".
It is certainly your money.

So here is some news and commentary for the ABC.

This is how the most moral defence force in the world deals with a terrorist chief who has been attacking towns and villages for days with barrages of metal and explosives that have been timed to correspond with the school day in  attempts to catch kids in the open.

Would the ADF be so restrained?  What would Australians have demanded of their defence forces?