Dead Babies, War Crimes And A Climate Of Hate

Alan Dershowitz at the Jerusalem Post. a few days ago.

Hamas is willfully and deliberately committing a double war crime by targeting Israeli civilians and using Palestinian civilians as human shields. The deliberate targeting of civilians, as Hamas admits – indeed boasts – it is doing, is a clear war crime. Hamas has aimed its lethal rockets at Beersheba, Tel Aviv, Haifa and Jerusalem. This is a war crime. Moreover, it is firing these rockets from hospitals, schools and houses in densely populated areas, in order to cause Israel to kill Palestinian civilians.

This too is a war crime

This has been called Hamas’s “dead baby strategy.” It deliberately puts Israel to the tragic choice of attacking the rockets and killing some children who are used as human shields, or refraining from attacking the rockets and thereby placing its own children at risk. Israel has generally chosen the option of refraining from attacking legitimate military targets, but when any human shields are inadvertently killed or injured, Hamas stands ready to cynically parade the dead civilians in front of television cameras, which transmit these gruesome pictures around the world with captions blaming Israel.


This blog is among those experiencing deja vu all over again. Something like that anyway.  Perhaps its time to come up with a term to describe that strange feeling you get when you're in a situation, and you are absolutely and nauseatingly certain you have been in the exact same disgusting situation before.

What would you call that?


Religious fuelled fanatics toss rockets mortars and missiles over the border aimed specifically at the civilian population. Acts that by any standard are vicious war crimes.
They shelter these cowardly attacks from under their own dragooned civilian population. Women and kids. Terrible acts
Another war crime.
The Israelis have responded with a precision that leaves military tacticians everywhere quietly astonished. Nothing like this has been achieved before. Over 2000 air strikes and the civilian death toll has been so low that the Hamas blood libel specialists and their allies in the Western left have been forced to use the corpses of kids killed in Hamas misfires and Syria for their propaganda dead baby pictures aimed at infuriating the mob.

"International Law Experts" Where Are You?

The racist left media in particular love to harp on about legality when it comes to attacking Israel. The "settlements" (whatever that means) are "illegal" (other than what is illegal under Israeli law .. they are not), the "blockade" is "illegal" (it is not), and above all the "Occupation" (it is not).
All these things are lawful under whatever remains of international law and there you have a legal opinion from Che Gorilla himself for free.
So has been every single munition that the Israeli defences deployed against Hamas since the start of this campaign.
Anyone care to disagree?
Anyone?
On the other hand every single missile fired by Hamas and its allies is a war crime and these are being counted.
A double war crime. Firing a missile at a civilian population is a war crime that warrants prosecution at the International Criminal Court..
But firing from the middle of a civilian population is another.
Every single civilian killed or maimed in this exchange has been the victim of the war criminals of Hamas and its allies.
They should be prosecuted. Those that are left.
War crime count

Hamas and Pals
2416
IDF
None
These crimes should be recorded.

If this blog does not have the distinction of first describing "the dead baby strategy" in those words then it must be unpleasantly close.

Then the blood libels. The dead kid photos. Despite billions from the West Gaza has no paramedics for its ambulances (at least none have ever been seen in the same photo) but dozens of photographers. The ambulance have no gurneys but   the city is bristling with rockets.It is the ultimate moral inversion and it is offensive.
Detractors of Israel whine about never being able to criticise Israel without being being accused of antisemitism. OK. here is their chance.
Listen very carefully to the whiners now. What do they have to say?
Why are they waiting? What are they waiting for? Some more dead kid photos?
That always play well. The Western media know that angle well. The blood libel staple a la Netzarim Junction. That's why there are always more photographers than medicos in all those photos. 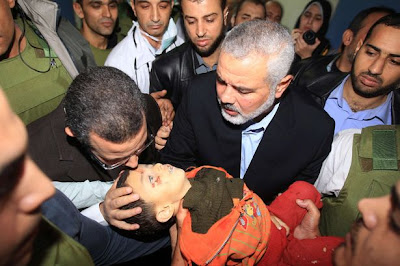 Yep. That's an innocent dead kid for sure. That the Prime Minister of Egypt for certain playing the Jews murder innocent children card for all it's worth.
Only one problem. This child was not killed in an Israeli air strike.. He was killed when a rocket fired from within Gaza misfired and fall short. One of many.
How long before the antisemitic left begins retailing the Israelis are murdering innocent children  war frenzy slurs?
Complete with staged photos fresh from the Hamas propaganda hate  mills?.


As we commented at Israel Thrives  just a few hours ago you could almost write the script. And it's got to the point that you can reply pre emptively to the criticisms of Israel that are sure to come from this act of self defence.

For almost a week Israel has been under attack. If you live in Australia and unless you have seen a blog like  this  it is very likely you would not know that. If you have received all of your news from Australia's national broadcaster you have no chance at all of knowing that.It's not that the ABC didn't know that Israel was under attack. They have correspondents living in the country for chrissake. It's just that they did not consider it news.And it's not that their "experts" didn't know that an Israeli response was imminent. You don't need to be an expert to know that. All you have to do is pick any decent country in the world, say Canada, or Australia, and ask yourself what would they do and you have your answer. It's just that the ABC editors chose to keep that "expert analysis" from you.

What could you say that has changed this time round?

If anything the ABC may have moderated its anti-Israel bias since it did a hatchet job fronted by the very strange John Lyons of The Australian a while back that included charming little fantasies from hell like"Palestinian children" in detention are strung up from "cross like structures" and "beaten to a pulp" under interrogation.

Sure they are, John. All the better to drain the blood for baking.

But any ABC moderation won't last and Lyons himself is unreformed.

For him this all about the "Occupation" and the "settlements". By that he is inviting us to believe that this is all about Jerusalem and the West Bank and the failure to reach an accommodation with the "Palestinians" that brings an end to the "Occupation". This is Israel's fault.

But this is a war launched by Hamas from Gaza that was declared by a hate crime atrocity of the type Hamas has specialised since it was formed. Any deal made about Jerusalem and the West Bank would mean nothing at all to Hamas. What do they have to say and do to prove that?

Hamas does not mince a single word about what they are about. They will not pause in these attacks on Israel and the Jews until there is no Israel and no Jews and they say so again and again. Not just Hamas.  It is not possible that Lyons is unaware of this. Why is Lyons incapable of identifying and enunciating that this ideology of undisguised Jew hatred might be close to the root cause of this conflict?

Lyons is utterly focussed on the fringe of the fringe in Israel and ignores completely what is mainstream in the Palestinian political culture and way beyond. Soccer hooligans for crying out loud. When Lyons writes of a "climate of hatred" that is "obvious" he is referring not to Hamas infested Gaza but Israel.

It is like defining Australian society by the dynamics of the Cronulla riots.

Has Australia ever produced a Middle East Correspondent who isn't an anti-Israel bigot?