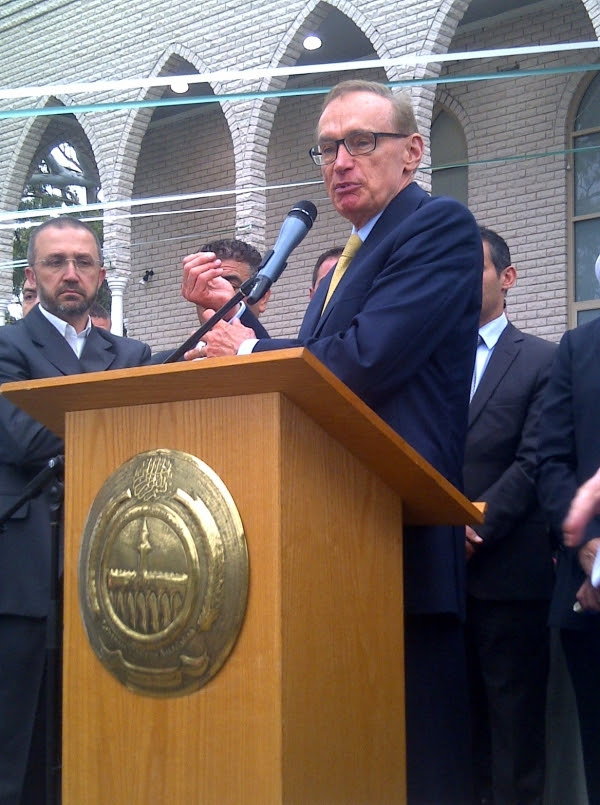 The Australian Foreign Minister has every right to be on the steps of the Mosque in Lakemba. No doubt all Australian politicians find themselves on the steps of all sorts of places at one time or another. It would be an odd sort of democracy if they did not.

But when he changes foreign policy to accommodate an ideology that is extremist, violent and driven by naked primitive religious tribalism to any degree then there is something going on in the state of Australia that should concern us all.

It seems that Bob Carr worries a lot about what he says on the steps of the Lakemba Mosque. This from an interview with George Negus on 26 October 2012.

George Negus: Do you think that this [ an Eid hudna in Syria] would have happened without the fact that this is a religious holiday, Eid?

Bob Carr: I think it was probably a powerful argument, and Envoy Brahami was well equipped to press that point, given his knowledge of the Arab world. But I hope when I'm standing on the steps of Lakemba Mosque tomorrow representing the Australian government at the big celebration of Eid, I'll have it confirmed that all the forces in Syria have signed off on this ceasefire. And of course there is the hope that if you get a ceasefire for four days of holiday, it could grow into something else. What we need in Syria is the implementation of a ceasefire and a discussion about political transition involving the different forces: a transition towards a democratic and plural Syria.


Well he certainly wasn't able to say that. No wonder he was lost for words.

So what did he say?

This from his own site.


This morning I had the pleasure of speaking at the Eid al-Adha celebration at Lakemba Mosque.
I said that this celebration is a reminder of the important role of Islam in the lives of many Australians.
Australia is home to nearly half a million Muslims and Islam is our country’s third largest religion (behind Christianity and Buddhism).
Australian Muslims contribute strongly to Australian society.
I referred to my first speech as a Senator in March where I quoted the King of Jordan, King Abdullah II. In 2004 he said: “Let us avert the clash of civilisations, and help the overlap of cultures. Let us partner for peace.”
I have worked hard to promote this since becoming Minister for Foreign Affairs.
The Australian Government funds a multitude of inter-faith, cultural overlap and community development activities overseas, for example:
• in the Philippines, our Strengthening Grassroots Interfaith Dialogue and Understanding small grants program supports peace-building activities by local community groups and NGOs;
• the Indonesia BRIDGE program (Building Relations through Intercultural Dialogue and Growing Engagement) supports school partnerships between Australia and Indonesia;
• Australia is contributing funding towards an “Australia Arab Women’s Dialogue” to be held across Australia in March 2013;
• through the Council for Australia-Arab Relations, we have provided 2,867 Australian high schools with a resource kit called ‘Arab Gateways’; and
• in 2004, Australia and Indonesia established the Regional Interfaith Dialogue (RID).
I also spoke of the conflict in Syria, the appalling dimensions of this crisis and the serious risk it poses to stability in the region – it is already spilling over its borders, to Turkey and more recently to Lebanon.
Australia strongly supports the UNSC’s call for all parties – and in particular the Syrian authorities – to cooperate fully with the UN and others on the provision of humanitarian assistance.
Australia has committed over $24 million in aid making us the third-largest national humanitarian donor.
It is important to emphasise that Australia has long-standing links with the Arab world, especially in trade and education:
• trade $13.4 billion in 2011; and
• over 18,000 students from Middle East studying in Australia in 2011.
Our formal links with regional organisations are growing:
• I participated in the second Australia- Gulf Cooperation Council dialogue in New York last month;
• we have a formal dialogue with the Arab League;
• we have a framework of cooperation with the Organisation of Islamic Cooperation;
• we have senior officials talks with the Arab League, the Gulf Cooperation Council (GCC), Egypt, Jordan, Tunisia, and Iraq; and
• we have agreed to hold these talks with Libya, Oman, Algeria and Morocco.
We are also supporting the democratic transition of Egypt, Tunisia, Libya and Iraq.
It is these links that we must remind ourselves of in the face of the efforts of extremist minorities to incite violence or create gaps between cultures.
.................................................................................................................................
What is remarkable about this press release? So remarkable that I have reproduced it in full.  Not what it says but what it does not say. Note the date. 26 October 2012..

Israel was already under increased attack from missiles and mortars fired at its civilian populations from under the cover of the civilian population of Gaza and barely a fortnight before Pillar of Cloud was forced on the Israelis in self defence..
These attacks are vile terrorist war crimes by any definition and we were led to believe by the standards of this Government. Certainly they say so in front of any Jewish audience and especially for the Jewish press. Always.
But in front of this audience not a word. Look again. Israel is not even mentioned at all let alone Gaza.  As if his audience had no interest in the subject at all.
We know now this press release is a lie.  Israel was mentioned that day. Of this there can be no reasonable  doubt. It's just that Bob Carr didn't want his "thoughtlines" on record at the time. In case the rest of us found out.

Including very likely the Prime Minister.