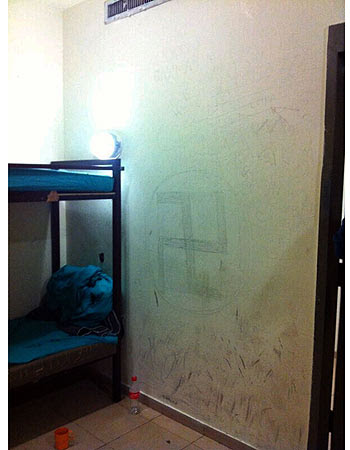 This is the gift that the Destroy Israel Now left/liberal activists left for the Jewish state after their detention and deportation from Ben Gurion airport following their annual "Flytilla" Pallywood-style publicity stunt aimed at demonising Israel and supporting overt genocidal antisemitism. Current members of the Australian Greens , including former parliamentarians and local counsellors, and their Australian friends and allies, participate in these protests.


As usual, the protest was a damp squib; about as successful as a North Korean missile launch. Most of the dickheads didn't even manage to get on the planes, reminiscent of last year's Death to the Jews Flotilla when most of their boats didn't manage to get out of the Mediterranean harbours. Not even Turkey.

Last year a number of blogs did a good job at outing Australian participants in these obscene pro-war demonstrations. Not all of them are keen to show their faces and even then most often on Press-TV, the official English language broadcaster of the regime that hangs gays and child rape victims from cranes, exterminates religious and ethnic minorities as policy and tortures and butchers university students and other dissidents in the streets.

Email ThisBlogThis!Share to TwitterShare to FacebookShare to Pinterest
Labels: Flytiila