ISM Exposed: How the ISM Sucker-Punched the IDF Again 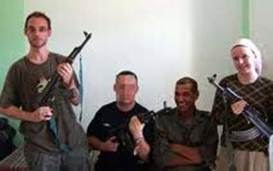 A revealing article on the odious ISM by this investigative journalist who spent years undercover in the group and observed first hand its violent tactics and its spit in your face lying propaganda techniques.

It operates in co-ordination with and under the direction of Hamas, Islamic Jihad, PFLP, and the Al Aqsa Martys Brigade. They are therefore active and committed genocidal  antisemites by definition. Israel has no business letting them into the country.


The ISM uses a motto coined by the late Malcolm X – “By any means necessary” – in implementing what they consider to be revolutionary tactics in bringing down the Jewish state, which they see as a first step in bringing down Western democracy. Lying and media manipulation are encouraged and elevated to an art form. Talk of ‘nonviolent resistance’ is solely for media consumption, since the ISM promotes armed revolutionary ‘resistance’ against Israel by serving as human shields for terrorists.

And so, it is in this context that for two hours leading up to the two minute video of Colonel Shalom Eisner striking Danish ISM activist Andreas Ayas, the ISM used their bicycles, bodies, and even physical assaults to obstruct the IDF in a closed military zone and prevent anti-terror operations. Earlier in the day, Colonel Eisner was struck by a stick-wielding ISM activist, leaving him with a couple of broken fingers.

Read it all. Wretched wraiths of dried up intellect who have managed to convince themselves that Israel and the "Zionists" are the source of all evil in the world and are determined to use all the liberties, tolerances, political freedoms and rights of the liberal democratic state to bring down liberal democracy, and to destroy those liberties, freedoms and rights utterly everywhere, while slandering and facilitating the murder of Jews.

And they call us the fascists?

Email ThisBlogThis!Share to TwitterShare to FacebookShare to Pinterest
Labels: ISM