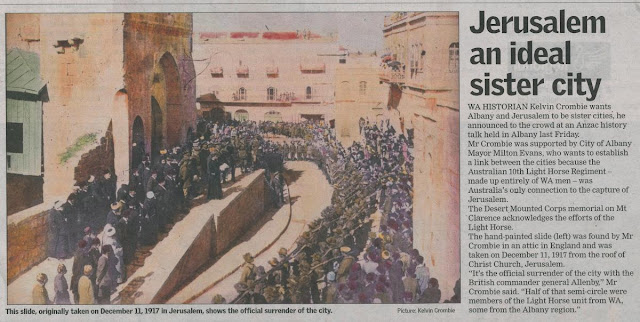 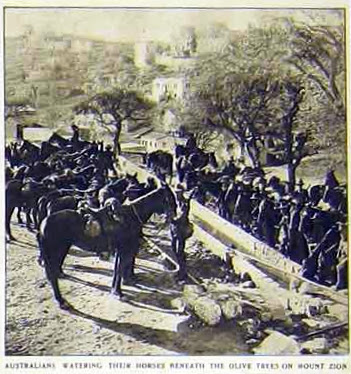 A guest post from blog friend Shirlee.and a reminder that there are many good Christians (thanks Shirlee I needed that) --. lifted from Daphne Anson

Little did I realise last Monday November 26th, when I went to State Parliament for the launch of Kelvin Crombie’s new book, El Alamein and the Jewish Survival, that I was in for such a special treat.

I must admit my main interest initially was to see the Tenach – Old Testament, which was presented to Field Marshal Montgomery as an official gift of gratitude for his role in saving the Jewish community in Palestine from the impending conquest by the German-led forces commanded by General Rommel.

Not only was it emotional seeing such a part of the history of Palestine, it was an extremely informative talk about the whole war time history of the region and how grateful the Jews of Mandate Palestine were to the Australian Forces keeping them safe. 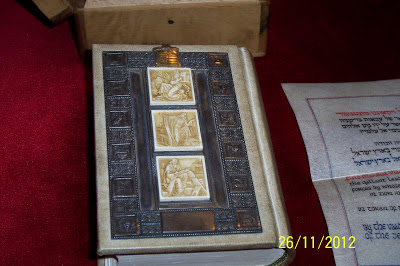 The words on the inscription, attached to the Tenach and encased on the cover in silver and mother of pearl are:


"Field Marshal Viscount Montgomery, GCB, DSO, the gallant leader of the victorious forces by whose hand God has placed salvation in Zion in the days of El Alamein presented in token of the everlasting gratitude of Palestine Jewry by the Vaad Leumi, General Council of the Jewish Community in Palestine".

During the twenty-four years he lived in Israel Kelvin heard from dozens of older Jewish people about the importance of the battle of El Alamein for the survival of the Jewish people in the land of Israel. One of these was Professor Alex Carmel from Haifa University. In the late 1980s Kelvin and Prof. Carmel together tracked down the Tenach, which the Jewish leadership of Eretz Israel had given to General Montgomery after the victory at El Alamein, at the UK office of CMJ (Churches Ministry among Jewish People). It was hidden away and forgotten.


"The parent organisation which owned Christ Church was CMJ, and during its two hundred years of existence had amassed a sizeable collection of artifacts which were mostly tucked away in an attic in their UK headquarters. One artifact, at least as far as this topic is concerned, stood out: the 'Montgomery Bible'. On one occasion in the late 1980's while visiting CMJ's UK office I was joined by an Israeli professor named Alex Carmel.

Alex informed me that once many years before he had been shown a special Bible belonging to General Montgomery On this visit I was determined to discover this special Bible, and finally one staff member recalled seeing it tucked away in a filing cabinet. So we opened the cabinet and there it was. It was a sight to behold — a beautifully made Hebrew Bible, with silver and mother of pearl on the cover."

Kelvin brought this Bible back to Israel and displayed it in the museum at the Heritage Centre, of Christ Church in the Old City of Jerusalem, which he had established . He used it when lecturing Israeli groups about Gentile involvement in the restoration of Israel. Most of those gallant soldiers at El Alamein and other battles which fought the Axis (German and Italian) forces in the region were Gentiles – whose very presence hindered the penetration of the Holocaust into the Middle East.

It is currently in Australia in Kevin’s care for the 70th anniversary of the battle of El Alamein, fought in 1942. 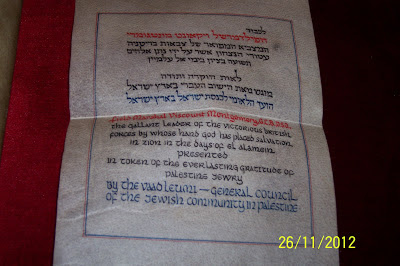 Kelvin Crombie grew up in rural Western Australia, listening to stories of the Anzacs from uncles who served in the Middle East in the Australian Army during the Second World War; and also due to various direct Israeli connections such as an Israeli family on a nearby farm; and the Six Day War in 1967.

He subsequently went to Israel in 1979.  This in turn led to him developing a very keen interest in Israel and the Jewish people. He was not a practising Christian and he is not Jewish. He went to Israel in 1979, as he told me, because he was searching. In the process he found his faith in G-d. He met and married his Dutch wife in Israel, where they lived for 24 years and raised their four daughters.

In 1986 Kelvin was asked by to become the guide at Christ Church, the Anglican church in the old City of Jerusalem, hosting thousands of people monthly, including secular Israelis studying the beginning of modern history in Jerusalem and the land of Israel.

As a guide he not only lectured these numerous groups but also had to undertake considerable research. During this research he discovered numerous historical artifacts. These included several large and unique models of Jerusalem as well as the largest portrait of Jerusalem, the 1879 Jerusalem Panorama, a painting, and the very special Montgomery Bible. One model, discovered by Kelvin in 1986, was made in Jerusalem in 1864; it revealed a tunnel going under Christ Church. In that same year, 1986, the tunnel was re-discovered, but not excavated.

Kelvin pioneered the "In the footsteps of the Light Horse" tours, doing his first of over hundred tours to Beersheba in 1988. In 2007 he was one of the main instigators of the re-enactment of the Charge of Beersheba and was the guide for the Light Horse tour. He periodically guided or spoke to Australian diplomatic, military and trade delegations visiting Israel.

He has written five books concerning the history of the period in Israel after 1798, mostly associated with the British and Anzacs, and has co-produced several documentaries on the same subject. His main work on the Anzacs is entitled Anzacs, Empires and Israel's Restoration 1798-1948.

In 1992 Kelvin travelled to El Alamein and together with Allied, German and Italian veterans recalled the 50th anniversary of this battle. Shortly afterwards during a meeting with the then Israeli prime minister, Yitzhak Rabin, he spoke of his visit to El Alamein. Rabin then spoke quite passionately about the danger that faced the Jewish people in Eretz Israel had the Germans won at El Alamein. A similar attitude was voiced by General Uzi Narkiss (the commander of the Israeli forces who captured Jerusalem in 1967) when Kelvin also interviewed him. It was clear that this sentiment was known by every section of the Jewish community who lived in the land of Israel during that traumatic period.

This present book goes more in-depth on this subject matter than his two previous books relating to the Middle East during the Second World War (Anzacs, Empires and Israel’s Restoration 1798-1948 and Israel) and includes more material from German sources. Apart from providing historical data, it reveals some of the motives behind this Nazi-Muslim agenda for destroying the Jewish communities of the Middle East. This aspect is important as similar forces of evil are still in evidence today. 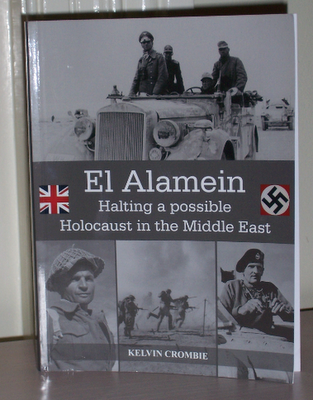 El Alamein and the Jewish Survival was launched at Christ Church in Jerusalem early in November; in the House of Lords in London that same month, at a meeting convened by the present Viscount Montgomery; this past week in Parliament House in Sydney; and 2nd December at the Friends of Israel Western Australia "Gallipoli to Jerusalem Day" in Perth. It is also planned to have the "Montgomery Bible" on display at these functions.

There is so much more to this very interesting man. Over the years Kelvin has become involved with other ANZAC military heritage and commemoration projects in Israel. He is a participating member of the Association of the Heritage of the First World War and was one of the initiators of the 2007 Ride of Peace and re-enactment of the 1917 Light Horse charge at Beersheba where he guided the seventy-strong group of horsemen.

Kelvin is occasionally asked by the Australian Embassy, the Australia/Israel Jewish Affairs Council, the Israel-Australia Chamber of Commerce, the Australian Army and others (including recently a WA Government delegation) to provide exposure to visiting delegations concerning the ANZAC involvement in the land of Israel.

He has also completed in conjunction with the Hatikvah Film Trust a documentary detailing this entire story entitled "From Exile to Restoration" (in Britain, "The Destiny of Britain", and in USA, "The Cyrus Call").