Aussie Pollie Tells It As It Is 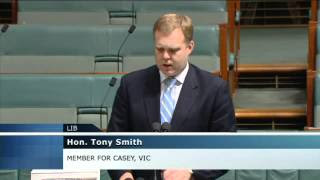 This is a speech in the House of Representatives that deserves to be preserved and kept under glass:


Mr TONY SMITH (Casey) (11:20): In so many ways the conflict between Israel and Hamas terrorists is a
struggle between the enlightened values of a modern democracy and the benighted values of mediaeval theocracy;

At its essence it is a struggle between civilisation and barbarism.

Those facts reveal that Hamas is an armed and dangerous terrorist movement with mass murder on its mind.It not only seeks the destruction of Israel as a political entity but also craves the extermination of every Jewish man, woman and child. You do not need to take my word for it. Article 7 of the Hamas covenant declares:

… the Islamic Resistance Movement aspires to realize the promise of Allah, no matter how long it takes. The
Prophet, Allah's prayer and peace be upon him, says: "The hour of judgment shall not come until the Muslims
fight the Jews … when the Jews hide behind trees and stones, and each tree and stone will say: 'Oh Muslim, ohservant of Allah, there is a Jew behind me, come and kill him' …

In other words, the official doctrine of Hamas preaches that the coming of the Mahdi, the Islamic redeemer, will be ushered in by divinely inspired genocidal slaughter of the Jews.

The movement is not very fond of gays either. Hamas foreign minister Mahmoud Zahar calls homosexuals 'a
minority of perverts and the mentally and morally sick'.

Nor has the Arab Christian community of Gaza fared too well under Hamas rule. There has not been a Christmas tree in the central square of Gaza City since Hamas seized total power in 2007. A few years ago the Palestinian Christian manager of a Gaza Bible Society bookstore was shot dead after being accused of evangelising on behalf of his faith. I note in passing that the invitation to this year's government staff Christmas party features a caricature of Tony Abbott as a green-faced grinch. But the real Grinch who stole Christmas is alive and well in Gaza, packing an AK-47 and wearing a green Hamas headband.

The contempt shown by Hamas for the most fundamental principles of liberty should come as no surprise.

Afterall, no-one should be surprised that theocrats do not turn out to be democrats. But what is astounding is the aid and comfort offered to hardline Islamic extremists by hardline Australian leftists. This past weekend a few hundred protesters assembled in Sydney to denounce Israel for having the temerity to defend itself from incessant Hamasrocket fire.

The Greens were there, Marxists were there and so were some jihadi sympathisers. It was bizarre tosee advocates of same-sex marriage parading shoulder to shoulder with advocates of a global caliphate who think that homosexuals should swing at the end of a rope. But as the TV footage showed, there were banners of the Greens and Socialist Alternative flying alongside the Hezbollah flag. Speaking from the podium was the most fanatical opponent of Israel in this parliament, Greens senator Lee Rhiannon.

While speaking on the Middle East,I would be remiss if I did not mention this government's disgraceful reversal of policy at the United Nations.

Foreign Minister Carr describes Australia's decision to abstain from the General Assembly vote on the elevationof Palestine's status as 'a good compromise'. But it was no compromise; it was a cave-in. It was a cave-in by a beleaguered Prime Minister prepared to sacrifice anything, including support for Israel, on the altar of her own political survival. We all want to see a two-state solution to the Israeli-Palestinian conflict but this will only be possible when those pledged to Israel's destruction finally see the error of their ways. The upgrade of Palestine'sstatus at the UN will set back the prospects of peace. It will embolden Palestinians to think they can get their way without any need to—[time expired]


A pity. I could have kept listening all day.


A letter to the Hon. Tony Smith MP

On behalf of this blog's readers in the US, Canada, UK and especially in Australia I would like to warmly thank you for your courageous speech in the House of Representatives on 29 November 2012

Israel and the Jewish people of whom Israel is the heart need real friends now more than ever. We know about fair weather friends. The ones who turn away and fall silent while the attacks grow ever more vicious.

Tony Smith's website is here. Do drop him a line. Friends should not be taken for granted.