There's always the prospect of a bit of good news if you go hunting for it.

Another one of them might be on his way to deadman paradise and with any luck the head Nazi in Lebanon might have cancer.


Rebels claim Naim Qassem killed in bombing on Lebanon-Syria border; Hezbollah denies that he was injured. 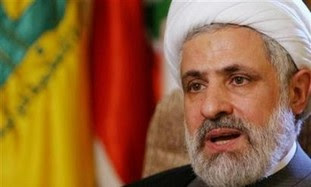 Hezbollah's deputy chief Naim Qassem was killed Tuesday when Syrian rebels bombed a convoy consisting of high-ranking Syrian government officers near the Lebanon border, news portal Now Lebanon quoted the Free Syria Army as saying on Wednesday.
“It has been confirmed... that Hezbollah’s number two man died after [receiving] a serious injury,” the Free Syria Army posted on its Twitter account.
Posted by geoffff at 5:18 AM