Law Talk Deployed To Normalise The Murder of The Jews

How long before someone in some distant ivory academia would actually seek to cover up this attack on the human rights of the Jews and us all with a veneer of respectability trawled from a warped and inverted vision  of international law that reflexively excludes Middle East Jews?

A vision that reduces acts of extraordinarily careful self defence by free people to the equivalent of those committed by vile criminals by any standard of law and morality known to man or God.

Incredible you would think. This would have been impossible thirty years ago and it is perhaps a sign of how far Western civilisation has retreated in the face of the onslaught of political Islamic imperialism since the Islamic Revolution that this is now common in our universities everywhere.

Have a look at this appalling opinion on the politics and legality of it all in The Conversation from the very pit of Australian armchair comfort.

Even while the attacks on the civilian population  of Israel still fall this academic in Australia can write this. Palestinians gather around what is left of a destroyed house after an Israeli air strike this week.EPA/Ali Ali


Gaza, ostracised, enclosed and pummelled, is being levelled – again. Israel’s case against Hamas, expressed both via air strikes and a social media war, is one of self-defence. Article 51 of the United Nations Charter affirms that right, one accepted in customary international law.

But the comments of the Israeli minister Operation Pillar of Defence are instructive and existentially terrifying: “the goal of the operation is to send Gaza back to the Middle Ages”. By any stretch of the imagination, such a statement is tantamount to evidence of a war crime, both in preparation and in commission. It is disproportionate and heedless of resolution, though it is justified by a shock and awe campaign via social media.

So where does international law stand on the conflict?

In terms of the dry legal matter, the jus ad bellum conditions must exist before conflict commences. Policy makers, in other words, must be justified to start the war. The second set of conditions are jus in bello – the way a war is fought.

Israel might well have been justified in the first premise, but the second is more difficult to sustain – shelling, for instance, densely populated residential areas, and destroying militants' family homes are problematic. Such instances are bound to result in collateral killings, which violates that condition.

But what are they fighting for? Justice in war is often the noble dream, an aspiration rather than a realisation. More often than not, the more suitable motif is tragedy; a conflict, as Hegel defined it, of right against right. The Israeli-Palestinian conflict is a reversal of that premise, a persistent attempt to correct wrongs with an application of other wrongs.

The only justice here is that of the barrel, the missile and the tank....
Read it all in fairness to the man. It is mercifully brief.

The justice here is what you see as law abiding peaceful and highly productive human beings are dragged into the docks and held up to a moral scrutiny for defending themselves in a way that demonstrates a care for the civilian population of the enemy regime that far exceeds that of the regime and its foreign supporters as far away as Australia.

Dragged by distant intellectuals to whom it would never occur to apply the standards of their own societies to the Israelis..
Or would be so dragged if the Jews didn't have an army now.  That must really grind their nuts.
The article drew this comment from Che Gorilla. 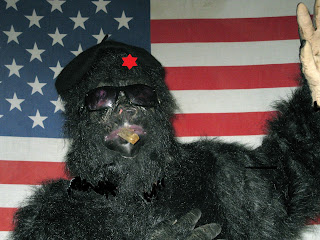 This article is an example of how murderous attacks on human rights can be dressed up in some Tolkienian language that I cannot believe any serious lawyer still uses to make the attacks look like perfectly legitimate exercises of international law.

I am of course talking about the human rights of the Israelis.

Let's be specific about this. The human rights of the remaining Jews of the Middle East and all those who shelter under their strong but tiny  democracy on the spit of land that the world has begrudged her, barely larger than a decent sized sheep run.

This latest attack on the Jews is obscene but no more than all before. Watch closely as it unfolds.

Religious fuelled fanatics toss rockets mortars and missiles over the border aimed specifically at the civilian population. Acts that by any standard are vicious war crimes.

They shelter these cowardly attacks from under their own dragooned civilian population. Women and kids. Terrible acts

The Israelis have responded with a precision that leaves military tacticians everywhere quietly astonished. Nothing like this has been achieved before. Over 2000 air strikes and the civilian death toll has been so low that the Hamas blood libel specialists and their allies in the Western left have been forced to use the corpses of kids killed in Hamas misfires and Syria for their propaganda dead baby pictures aimed at infuriating the mob.

At the time of writing it looks possible the Hamas war criminals have been dragged to their knees and will agree to stop trying to murder Jews in this way for a while in return for Israel doing what it was doing to start with. Minding her own business.

So it is a distraction from the vicious war crimes that they and the other sick political cultures that infest the Arab Muslim world and Iran and rage through Gaza like the Brisbane River in flood are inflicting on the civilian populations of one another right now.

A distraction from the crimes and wars against the people that political Islam is waging into the Arab Autumn  just as it has since the end of the First World War..

In human carnage on a vastly greater scale as it has always been for sixty or indeed a hundred years. You would have to be strangely indifferent to the value of human life to overlook that.

So here we are on the other side of the world in a peace taken for granted engaging in what passes for intellectual polite discourse and all that can be offered to half the surviving Jews of the world and their remarkably productive and brave little democracy is what?

Take the rockets mortars and missiles among your women children and old folk for a week and the world will not notice. The ABC didn't even bother to report it even though they have correspondents living in the country. Arabs trying to murder Jews. Dog bites Man. Not news the old joke goes except it is no longer funny. A dog biting a man is news.

There is something  very sinister  that a discussion in the West cannot begin from the starting point that the Jews of the Middle East once widespread throughout Muslim lands, but dispossessed and now focused almost entirely in one remarkable little country, have the rights of all other people whether or not they are denied from other populations by ugly tyrannies like Hamas and its allies in Gaza and abroad..

By this stage in the ascent of civilisation

The writer talks about the Middle Ages. That would be progress for Hamas and its allies.

One might wonder what Israelis who are currently going through the hell of terror attacks that no Australian would tolerate for a second might think of an article that so callously brushes over their legal and human rights as if they have none at all. As if they are not human.