"International Law Experts" Where Are You?

The racist left media in particular love to harp on about legality when it comes to attacking Israel. The "settlements" (whatever that means) are "illegal" (other than what is illegal under Israeli law .. they are not), the "blockade" is "illegal" (it is not), and above all the "Occupation" (it is not).

All these things are lawful under whatever remains of international law and there you have a legal opinion from Che Gorilla himself for free.

So has been every single munition that the Israeli defences have deployed against Hamas since the start of this campaign.

Anyone care to disagree?

On the other hand every single missile fired by Hamas and its allies is a war crime and these are being counted.

A double war crime. Firing a missile at a civilian population is a war crime that warrants prosecution at the International Criminal Court..

But firing from the middle of a civilian population is another.

Every single civilian killed or maimed in this exchange has been the victim of the war criminals of Hamas and its allies.

They should be prosecuted. Those that are left.

This will be updated. These crimes should be recorded.


This from the Elder of Ziyon 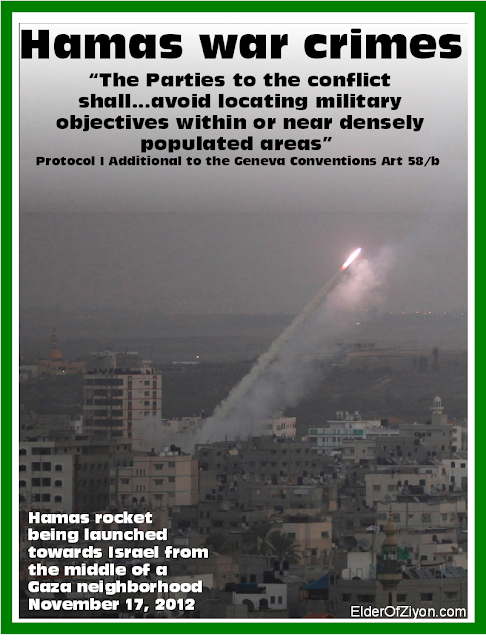