The Ethnic Cleansing of Old Jerusalem

The War of Independence
The greatest Arab atrocity of the war occurred on May 13, 1948, at the Etzion Bloc settlements. Dozens of surrendering defenders, including some twenty women, were killed at Kfar Etzion just north of Hebron,. The Etzion Bloc had seen a previous massacre in January 1947 when a Haganah platoon of 35 soldiers sent to help them with medical supplies and ammunition was slaughtered by hundreds of Arab militants. Their stripped, mutilated bodies were found the next day by a British patrol. 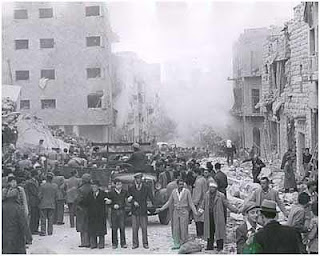 
Shirlee emails a just published eye witness account by British clergyman, Hugh Jones,  of the battle for the Old City of Jerusalem after the Israeli Declaration of Independence on 14 May 1948, the fall of the ancient Jewish Quarter to the British sponsored and officered Arab Legion and the ethnic cleansing of the remaining Jews from their City.

Caught between Jewish and Arab forces fighting in Jerusalem’s Old City was Hugh Jones. Refusing to flee to safety, Jones instead recorded a journal, never before published, that offers a unique personal glimpse of the drama and tragedy of Israel’s birth


Sixty-four years ago, in the days and weeks around the declaration of the State of Israel on May 14, 1948, Jews and Arabs were battling for control of Jerusalem. The Jewish areas of the city were cut off by Arab ambushes along the road up from the coast. The bitterest fighting raged in the Old City, where Arab and Jewish soldiers battled house to house inside the walls as Jewish forces tried repeatedly — and failed — to break in from outside.

Also in the Old City in the midst of the fighting was a British missionary, Rev. Hugh Jones of Christ Church. Warned by British authorities to “urgently consider the desirability of leaving Jerusalem,” Jones stayed nonetheless and, holed up in the church’s compound near Jaffa Gate with 50 others, observed the violence raging outside, and sometimes inside, the compound’s walls. He wrote a remarkable journal that has, like Jones himself, been forgotten. It was rediscovered two years ago in the archive at Christ Church, and appears here as a unique take on the dramatic and horrific days around Israel’s birth.

Jones’s journal includes descriptions of violence, asides about regular life — notably the reverend’s seemingly unshakable commitment to tennis, which not even a war could dampen — and expressions of the faith that sustained him through the harrowing events that saw the loss of the Old City by Jewish forces and the creation of the state of Israel.

The Journal is compelling reading. See it here.

Shortly it will be sundown 25 April 2012 in this part of Australia.